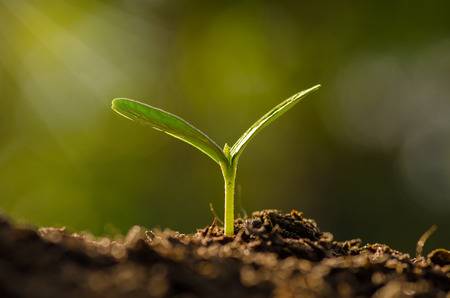 There was once a seed - tiny and small,

It was lying, unattended, near the flowered wall.

Ah! Alone it was, not a single seedling to share,

It felt unloved, devoid of warmth and care.

All around it were mighty, proud trees,

While all our seed had was its tiny little size,

How, erupting the earth, was it supposed to rise?

Down it lay, buried deep in the ground,

Lost in thoughts, in its head a million sounds,

It felt insecure, and as useless as one could be,

How would it grow like the big old tree?

It lay there hopeless, all broken from within,

When suddenly, it felt a trickle of rain on its skin.

It got washed off of its doubts, its worries seemed less,

At last, it had found somebody to caress.

The soil saw it smile, but it was still beneath the land,

So the soil, with its words of wisdom, decided to lend a hand.

The tiny seed absorbed all it could, it was being nurtured everyday,

The rains were now over, and soothing breeze began to sway.

Then, one fine day, it glimpsed the sun in the sky,

A smile so beautiful had never reached its eye.

It felt warmth, it felt goodness and glee,

This made it realize how good the world could be.

The seedling decided to spread its wings, and a tiny radicle emerged,

It was going to have ROOTS - in relief it was surged.

It tried pushing further, a plumule erupted from the sand,

The marvellous sight of the world was all it could comprehend.

Ah! It so realized - it was not 'something' others could throw,

The rain, the soil and a bit of warmth were all it needed to grow.

It started to BELIEVE, to realize all that it could be,

And that one day, definitely, it would grow as big as the large tree.

A girl in her twenties, trying to find herself in her words :)

Welcome to my world of words :) In my writes you'll find me. I hope you find yourself here too.